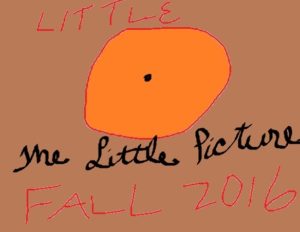 “Where’s the psychic pictograph that usually illustrates this newsletter?” I wrote you in the beginning of Fall. I left it out as it showed people choosing “The Little Picture” not the Big Picture, not the well-being of Planet Earth, and it was too depressing. I actually made two pictures for Fall but they were both disturbing.

“The Little Picture” shows Fall 2016 with the big orange circle (the Donald), and the black dot symbolizes the “little self” and the fearful, short-sighted choice we collectively make. 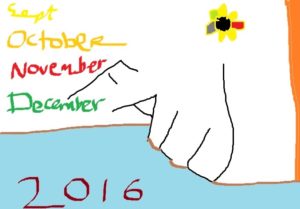 Unhappy with that picture, I made another one, but it was just alarming in a different way. It illustrated the U.S. going down, taking a fall. Hopefully however, the pictograph’s story line turns up into a flowering. The next four years allows for a flowering and good things to grow when all is said and done. Saturn squared Pluto is in direct effect on Election Day, that’s the new order challenging the existing structure. destroying the old with a hundred scatter-shots. However, after collectively going down, people and their new coalitions flower, and “the fall” is only four years.
Here’s a re-print of the earlier Fall newsletter messages that will make more sense in light of a Trump presidency. Following them are new messages I got this morning about changes in America.

From last month’s Fall/October Newsletter: Nature and its creatures take a big hit. The truth that resounds through whatever suffering we witness this Fall is that we are all affected, all in this together, all One.

Social Change: Trying to destroy The Enemy won’t work. If there are waves of ugly behavior subsides fastest if we don’t fight back with how wrong other people are. People can turn their attention to what they want to create if they’re free of venom and bile.
Stay with your own happy crowd! There’s power in numbers of like-minded people.
Out in the political world: former friends are enemies.

Circumstances place a lot more responsibility on people to make their life what they want it to be: willingness to believe in one’s dreams becomes much more important.

Among other things in the next four years, the U.S. could get in a deep recession. Still, “all is well”- this is not the end of America; it’s a reckoning; and consequently a more truthful and galvanizing place.

People are going to come out of this shock and they’ll still have a strong fighting energy. There will also be ugly behavior on display (The KKK marched on bridge this morning in North Carolina) but if we blame people for being ugly, then it will be a war. It’s best to develop your own strengths and personal gifts, or join the movement of your choice to change things four years from now. Rx for the immediate future: Heal yourself, take care of yourself first after this rough and shocking election. Fulfill personal goals, give yourself extra TLC, do what makes you feel better and what you care about.

Once people recuperate from the shock, this turn of events makes people a lot more responsible and willing to take matters into their own hands. Many peoples’ inner light will strengthen. Artists will be prompted to turn out their very best work. Young “influencers” spring up in large numbers. People will re-group and form new groups, putting their energy into what they want to see happen, or fighting what is happening as a coalition.

Messages for different groups of people:

Hispanics: Getting active in township-level politics weaves a strong supportive mat of local roots. (A portent of this path forward is the defeat of Sheriff Joe Arapio in Arizona, due to the cumulative effort of coordinated grass roots movements.)

Blacks: Just wait. You’re disgusted but used to this; your path to victory lies in the twenty to twenty four year olds, in the young energized population. The youth will manage and see your collective success.

Asians: You are not particularly affected.

White liberals: A lot of personal re-examination and inner searching; lessons to learn.

For the white people who won: As a whole the win will make you kinder, that is the surprise development. This suggests that either you feel supported by the next administration, or that your voice being heard is healing in itself and it makes you more willing to unite as a nation than people suspect.

I’m concerned that Native American people were not mentioned in this message. I fear that the first Fall message, about how Nature and its populations take a big hit, is relevant to them. Yesterday when America was electing a new president, the Dakota Access Pipeline operators, Energy Transfer Partners, announced they would defy President Obama’s orders, and tunnel under Lake Oahe to complete the pipeline – water protectors and the U.S. government be damned. Chief Phil Lane, Jr. from Canada spoke at UnifyFest in Santa Fe recently. He suggested that the people at Standing Rock leave before winter. He proposed that they go out into the public with their message and activism rather than stay – he thought that would do more good, and perhaps was also apprehending that staying would be dangerous.

Family Healing and More: As someone privy to peoples’ private lives, I’ve heard a lot of horror stories the last couple of months about family fights this election caused. I don’t think this is going to be as big a problem going forward as it was before the election. If people are better off together, those in personal relationships (who want to stay connected) will flow with the stars right now and try to heal and mend rifts and adapt to what’s new…that’s the message of election day’s Jupiter in Libra sextile Saturn in Sagittarius.

Coming soon: The Winter newsletter, with 2017 horoscopes for each of the zodiac signs, followed in a couple of weeks with a psychic prediction newsletter for the year with winter travel itinerary ( a Valentine’s Day trip to the Bay Area…), and announcements about exciting new events here in Santa Fe!

Los Angeles clients: I’ll be available November 22nd and 23rd if you’d like an in-person psychic counseling and spiritual healing appointment. House calls only; please get in touch by email or 505-982-3294.